WHERE DID ALL THE "MANAGEMENT ISSUES" GO?

Headquartered in South Korea, GOLFZON is a leading provider of golf simulators across the world. Since its inception in 2000, the company has made remarkable contributions in improving public access to the sport of golf. It holds more than 250 patents with about 375 patents pending – a true testimony to the culture of innovation that runs deep in the company.

Bringing Golf to the Masses

GOLFZON is embarking on a new phase of growth in its journey of making golf more accessible to people around the globe. Leveraging its VR capabilities and extensive experience, GOLFZON is now focused on developing ‘golf technology that the world has yet to witness’ through innovations in golf training, golf course management, and golf equipment. In Lenovo they found a trustworthy technology partner that would support them in this journey. 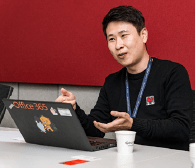 PREPARATION IS BETTER THAN CURE Growth in any company comes with its own set of challenges. Today, GOLFZON has evolved into a “Total Golf Culture Company” that provides integrated services combining the three processes of knowing and enjoying golf and communicating through golf. As the company advanced and grew, the ability to manage internal resources in an efficient manner became increasingly important.

GOLFZON saw effective resource management using a flexible IT solution as a preventative measure that could help them save on repair and maintenance costs down the road.

The company realised that if an enterprise PC is not immediately operable, stolen or faces unforeseeable issues, the entire company is likely to be impacted.

In addition, with the number of PCs increasing, the burden on the limited technical staff was likely to grow multifold if the PCs in use did not allow for easy manageability. There was a need for PCs that not just performed reliably, but were easy to repair, replace or upgrade, as necessary.

TECHNOLOGY THAT TICKS ALL THE BOXES GOLFZON has succeeded in minimising the risk associated with its computer equipment by introducing the Lenovo ThinkPad notebooks into the workplace. At present, the company has close to 500 ThinkPads in operation. The company zeroed in on the ThinkPad X Series with the end goal of optimising the functionality of the new standard operating system (OS) and maintaining compatibility with GOLFZON’s legacy IT setup.

“GOLFZON prioritised security when selecting the Lenovo ThinkPad,” says Heechoul Cho, a senior researcher in the Group Intranet Support Team at the GOLFZON Newdin Group. “I also feel that portability is often overlooked for notebooks which are used internally. But in reality, there is a lot of demand for batteries that are lightweight and long-lasting,” he adds. The ThinkPad X270 notebook adopted by GOLFZON weighs less than 1.4 kg and can last up to 21 hours when equipped with a 3+6 cell battery set up.

The ThinkPad X Series comes equipped with Trusted Platform Module (TPM), a hardware-based security feature that prevents sensitive data from being compromised even when a notebook is exposed to external parties, or when someone attempts to manipulate the firmware chip together with RSA encryption.

More importantly, the BIOS is extremely stable, making it easy for users to install or update PC management software without any glitches.

Additionally, the renowned dependability of the ThinkPad protects it from the bumps of day-to-day use, whether it is placed atop an employee’s desk or carried around from one meeting to the next. In short, these are devices built to support seamless work environments – anytime and anywhere.

Employees are highly satisfied with the notebook due to its design, portability, and battery performance in addition to security features

LESS DOWNTIME, BETTER PERFORMANCE Three years have passed since GOLFZON introduced the ThinkPad to its workforce. “Employees are highly satisfied with the notebook due to its design, portability, and battery performance in addition to security features,” says Cho. Currently, 70-80% of all notebook users are using ThinkPads and thus helping maintain consistency in repair and maintenance work.

Cho commends the ThinkPad’s ability to function smoothly in a variety of environments resulting in considerable savings in time and effort. The Group Intranet Support Team at GOLFZON immediately achieved a decrease in the number of technical issues. “Without a doubt, the number of problems encountered with the ThinkPad is less than what we faced when using competitor products,” added Cho.

GOLFZON has also successfully reduced the number of management issues to less than half after the introduction of ThinkPads.

It is worth noting that employee UX has improved significantly, thanks to the ultra-portability and trustworthy performance of the ThinkPads. According to Cho, it is challenging to find notebooks as flexible as the ThinkPad in terms of hardware and software repair and maintenance.

In addition, the service and support offered by Lenovo is the icing on the cake. “The three-year warranty means that there are no additional running costs to be concerned with and the overall specs and dependability - such as the buttons on the touchpad and the resistance to scratches – results in superior performance vis-à-vis the competition,” says Cho. 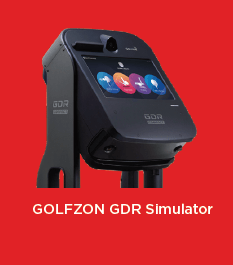 Considering the overall user experience and significant manageability benefits, GOLFZON now has adequate momentum to push for deployment of ThinkPads across the entire company. “When looking at the GOLFZON Group as a whole, it is important to see what kind of products are used at headquarters, and consequently, I am of the view that the ThinkPad will be recommended as our new standard PC,” remarks Cho.

The company is currently using the Windows 7 OS but plans to switch to Windows 10 next year. And even with the new OS version, Cho is confident that the ThinkPad will be capable of performance and features that cannot be found in the competitors’ products. The ThinkPad is an exceptional device that has proved to be a hole in one for GOLFZON.

ThinkPad Tested to the extreme