Norwegian Air, the sixth largest and one of the fastest growing low-cost carrier in the world with around 500 routes to more than 150 destinations, is redefining the flying experience for pilots with an out-of-the-box cockpit solution powered by ThinkPad X1 tablets.

Changing the Way We Fly

From teaching Norway’s air travelers to book their flights online to offering mobile phone and wireless Internet services on flights as early as 2008, Norwegian Air has always been at the forefront of technology. It is hardly surprising that the airline has been recognized as "Best Low-Cost Airline in Europe" for the fifth year running, and "World’s Best Low-Cost Long Haul Airline" for the third year running.

Interestingly, 2008 was also the year when Norwegian kick-started the Electronic Flight Bag (EFB) solution for their pilots. Every 3 years the company upgrades their current EFB system to keep up with technology improvements, and to add more speed and reliability to the EFB solution. The company started with a Novero device, switched to Panasonic Touchpads in 2013, and are now using ultra-reliable ThinkPad X1 tablets as part of their EFB solution. 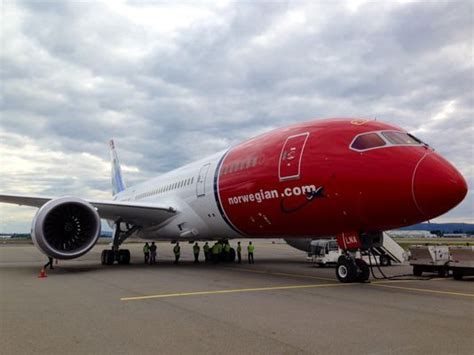 From being a little known regional airline to gaining global recognition as a pioneer and disruptor in the aviation industry, Norwegian has come a long way since it started operations in 2002. One of the key attributes that helped them get here is the company’s ‘out-of-the-box’ approach to doing business. This is evident in the way Norwegian implemented their EFB solution.

Deploying an EFB solution for an airline presents a number of unique challenges. Put simply, an EFB solution is designed to replace the pilot’s physical flight bag – which earlier carried checklists, flights plans, and navigation charts – with a laptop, tablet or a device.

The choice of this device is critical, as they have to operate under a wide range of challenging environments. Additionally, the devices need to have a modem that provides uninterrupted connectivity across the many routes where Norwegian operates.

"When we fly to Dubai, our planes are suddenly in the middle of the airport with a hard sun hitting directly on the tablet. In Norway, it is just the opposite with freezing temperatures. So, we perform a number of tests internally to find the device that best suits our needs," explains Klaus Olsen who is the EFB Administrator at Norwegian.

Also, stability was of the essence for Norwegian. According to Klaus, these devices would be used from very early in the morning to late in the evening, and during the summer program, they would run around the clock.

We needed a tablet that would perform reliably 24/7, in all environments.

After testing a number of devices, Norwegian shortlisted Microsoft Surface Pro 4 and the ThinkPad X1 tablet as frontrunners for their EFB solution. However, the lack of an internal modem in the Surface Pro 4 was a deal-breaker for Norwegian. An external modem did not provide the 3G/4G coverage needed for the solution to function without disruption. The company turned their attention to the Lenovo’s ThinkPad X1 tablet.

"We started testing the Snapdragon X7 LTE embedded modems in the ThinkPad X1 tablet and discovered that it offered good coverage across practically all the countries that we operate in. It was superior to anything else that we had tested, and this was the main reason why we chose Lenovo," says Klaus.

It is worth noting here that the tablets were not deployed right out of the box. Lenovo’s product team worked very closely with Norwegian to make a number of significant customizations on the ThinkPad X1 tablet. For example, Norwegian had little use for volume control buttons. So these buttons were customized to allow pilots to control display brightness with ease and speed. In fact, the new generation of ThinkPad X1 tablets offers this customization option within the BIOS itself.

While it is a little early to share hard numbers on the impact of the solution, the overall performance of the ThinkPad X1 tablet has been impressive for Norwegian. "The pilots are very happy with these new tablets because it is bigger – you can get more overhead on the screen than we could earlier with the Panasonic device," says Klaus.

Connectivity was a key factor here. Norwegian pilots often needed to change the flight plan or alter fuel levels and therefore needed to be connected at all times. Without online access, the process had to be carried out manually over a call. Thanks to its powerful modem, the ThinkPad X1 tablet provides reliable coverage everywhere they go.

"It’s not easy to find a modem that practically covers the whole world like the modem on the X1 tablet. It saves us a lot of problems," exclaims Klaus.

Also, the 2nd generation X1 tablets came equipped with high-performance Intel® Core™ vPro™ processors that performed calculations faster, helping the pilots save time and effort. "You can say that without the EFB and without the X1 tablet we are "unable" to fly today," he says.

Klaus is also all praises about the exemplary customer service from team Lenovo.

We have had a few issues but I really need to compliment the Lenovo support team. We have received excellent support especially from the Lenovo team in Denmark and from Soeren Nielsen. I can almost say that if it had not been for him, we’d probably not be where we are today.

The company has a very good ongoing dialogue with the sales and development team at Lenovo. They often approach team Lenovo with new requirements or suggestions and have always been able to get a positive response. "Working with Norwegian has been challenging and rewarding in equal measure for us," says Soeren, Service & Support Manager at Lenovo Denmark.

Norwegian has been an industry leader in Europe since 2008. "We strive to always stay one step ahead of the competition. We constantly explore new technologies that could improve the operational efficiency of Norwegian. That’s what it is all about – optimizing the workload, reducing the weight by taking away paper and enhancing safety," says Klaus.

The future is full of new possibilities for Norwegian. The company is looking forward to the journey ahead with Lenovo as it continues to conquer the skies, soaring on the wings of innovative thinking and firm determination.